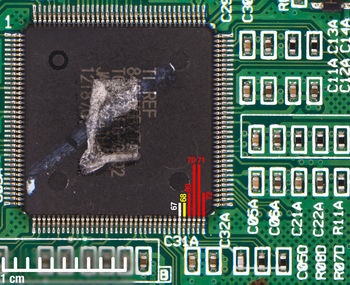 Image of the TA3 ASIC highlighting the relevant pins. Note the silk-screened pin 1 label and the filled circle on the upper-left of the ASIC.

The TI-84+CSE and older TI-84+/SEs use the TA3 ASIC (port 15 reads 45h), pictured on the right. Pins 67-72 on the TA3 connect to an external RC tank circuit. The calculators have 4 CPU speed modes, which were originally supposed to be 6, 15, 20, and 25 MHz; production calculators only have 6 and 15 MHz modes. The four red pins correspond to the four CPU speed modes.

To enable speeds 02 and 03 on the TA3, add resistors on pins 70 and 71. The calculator seems unstable above 22 MHz, which suggests that TI didn't implement the 20 MHz mode due to resistors not being accurate enough (some calcs might get a particularly bad resistor and end up being more like 23 MHz for the resistor value that should give 20 MHz). The TA1 ASIC is a reduced pin count design and appears to lack the pins for the 02 and 03 CPU modes. 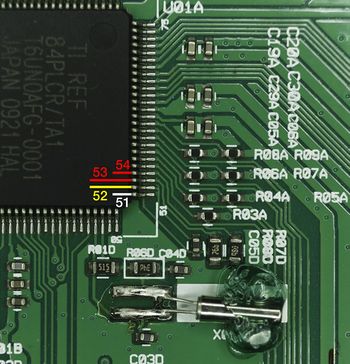 However, a much easier---though less precise---method is to adjust R07D with a pencil. The graphite marks left by pencils are actually conductive, and it turns out that HB pencil marks are in the right range for adjusting the resistor's value. By drawing a really heavy mark over the face of the whole resistor, you can pull down the resistance enough to get 18-19 or so MHz. It's also possible that a different weight lead like 9B might be even more conductive, allowing even faster speeds, and you can always smudge the graphite off with your finger if the calculator proves unstable.